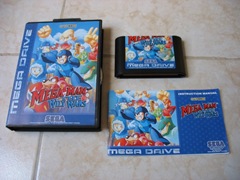 Mega Man: The Wily Wars is compilation from Capcom containing remakes of the first three games in the Mega Man series. It was the only Mega Man game to be released for the Mega Drive/Genesis and was only available in Japan and Europe – although it was available in the US through the Sega Channel service.

The compilation features an upgrade to the original games graphics, as well as arranged music. It also provides battery back-up for each game. As a result, is possible to continue Mega Man from a later point in the game, though Mega Man 2 and Mega Man 3 lost the password feature. Several glitches were also removed.

The cart also features an exclusive game mode when all three games are passed, called “Wily Tower”. In this mode, Mega Man travels through three different stages fighting new Robot Masters and the fight Wily himself in the fabled tower. There, you’re allowed to arm Mega Man with eight of any weapons and three of any support items from all three games.

The game itself is far from common and quite in demand.

I have to ask thorough, why did this not receive a US release? Can you imagine if it did, OR if they ported it to the SNES? That would be amazing.