With the first year of gameSniped behind us, I’m trying to add a lot of original and useful content to the site beyond just finding you rare stuff to buy. One thing I intend to place a lot of emphasis on is items that sell for high prices, yet most of us are unaware of.

As of today, I am naming this a new section of gameSniped called: Unknown Expensive. I actually hate that title, so if you think of a better one, let me know. Snazzy graphic coming soon.

Anyway, yesterdays post about the Ultima game may have been obvious to some people, but I think this is a different case. 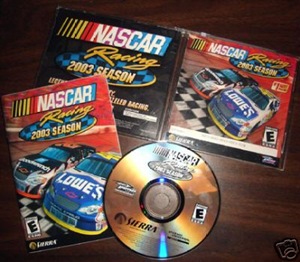 I present to you a game I’m relatively sure most of us would skip buying, even if it were priced at only a buck:

Ok, I admit I was confused about this too. Sports game? For the PC? Selling for that much?

Well it appears this game was the last one released by the company Papyrus before the Nascar license was sold to EA Sports. In the minds of Nascar fans, that’s where the series took a turn for the worst.

The game features an extremely popular multiplayer interface, which can used by up to 2500 drivers at any one time. This usually results in fields of up to 43 human drivers driving simultaneously in online races. Despite the age of the game, there are several online leagues still running. Private companies have also been started to fulfill the need for professional grade multiplayer servers and league management software for this game. Also an extremely active modification community has released a ton of new mods, updated cars, tracks and templates which have kept the game fresh and up to date with real life racing.

Not only is the fan community still playing this game, but NASCAR driving superstars like Dale Earnhardt Jr. and Martin Truex Jr. are known to be players of the game, and many professional drivers are said to use the games online multiplayer mode to practice tracks before races.

It’s a game that’s almost guaranteed to be dirt cheap if you see it in the wild, and definitely worthy a place on your watch list.