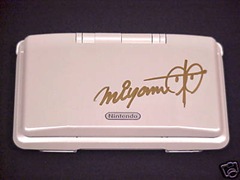 The final contest is progressing nicely and we have some great entries. One of my favorite so far is this ended auction for a signed Pure White DS. Ending price was a hefty $1,600.00.

On the E3 convention in Los Angeles 2005 I had the crazy luck of winning this Nintendo DS signed by one of the greatest (if not the greatest) videogame personality in the world, Mr. Shigeru Miyamoto himself!

Now it can become yours!

Shigeru Miyamoto is a man that doesnâ€™t need a closer presentation because as you probably might know this is the man we have to thank for games like Super Mario Bros, The Legend of Zelda, Donkey Kong and many many more!

In numerous circles around the world Mr. Shigeru Miyamoto is regarded as a living legend and now you have the chance to invest in a Pure White Nintendo DS that he has signed personally.

This is the given crown jewel in anybodyâ€™s videogame collection and rest assure it will only grow in value in the years to come!

This Nintendo DS has the color â€œPure Whiteâ€ witch only makes this DS more exclusive because it was only available for purchase in Japan.

Mr. Shigeru Miyamotoâ€™s signature is written with his own gold color pencil. =)

The Nintendo DS itself have never been used, has no scratches what so ever and comes with a special made Nintendo DS aluminum briefcase. (Se pictures).

I have also provided pictures with my exhibitor pass used by me to get entry to the E3 convention.

I also have an odd fondness for this Farting Yoshi Necklace.