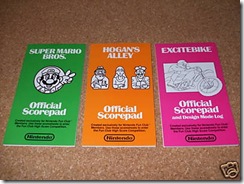 Nicola has taken the reins with the posts lately, but I’ve been at work in the background. Sever has been upgraded and should be faster, if you look on the bottom on the site you can see we have automatic translations for tons of non English languages and we have some nifty surprises in store for the coming month.

Anyway, I though these Nintendo Fun Club Scorepads were overpriced at $200.00, looks like I was wrong.

eBay seller tubeway has a sheet of Atari prototype labels. Cheap too. 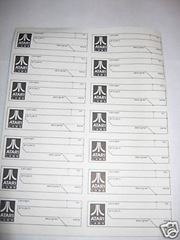 Up for Buy it Now are 7 Atari Labs prototype label sheets. I’m a former employee and received a small number of these working there. These were slapped on prototype cartridges for the Sega Genesis, Super Nintendo and Game Boy systems during their development, before the games were distributed internally to different departments. These are unused and in mint condition, although there is a little bending on a couple. I’m selling each sheet individually. If you already have a prototype by Atari that is unmarked, then you could put these on them. I’ll ship these flat with a backing board in a large envelope to protect them.

The same seller also has two award plaques for the American Technos arcade game “Wrestlefest.” These were given to the company by Play Meter Magazine, an arcade game industry magazine, and the AMOA Arcade Machine association. Also a SNES Boxed Final Fight Guy.

And yes, voting. Up by Monday, I swear! Also, contest prizes have started shipping, email me (don’t comment, I may miss it) if you still don’t have confirmation.