For those of you craving a classic Metroidvania style game, you’re in luck. Brazilian game developer JoyMasher recently released Odallus The Dark Call last month. This game is a shout-out to the beloved Castlevania and Metroid series on the NES. It also blends deliciously well elements from Ghosts ‘n Goblins. For example, the map gives you this 80s Capcom feel. 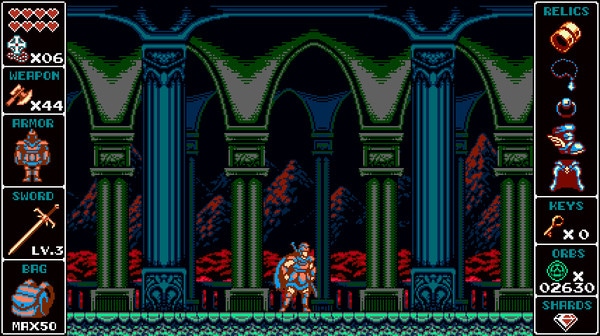 This game is a worthy successor to the by-gone era of the NES platformer. JoyMasher, who doesn’t have many games under its belt, has picked up the tourch from Konami by recreating a classic video-game in a genre they helped make famous. We’ve been dying for a proper Metroid platformer for ages now.

Getting back on track, we delve into all the details that can make or break Odallus, just down below in our GameSniped Review. Does our protagonist have what it takes to stand with the likes of Simon Belmont? 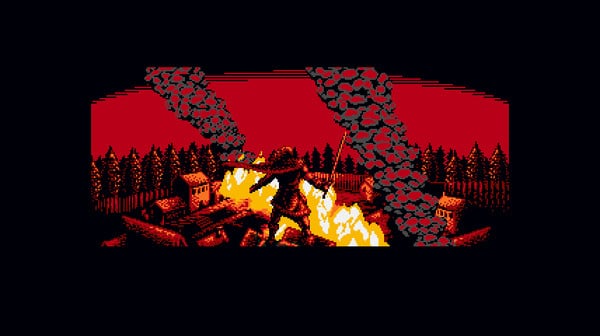 You are Haggis, a badass hunter whose son has been kidnapped by demons. His entire village was burnt to a crisp, and his beloved Gods seem to have abandoned him. What can a man do when he’s facing the Devil all by himself?

Haggis is a much more grounded heroe. He just wants to kill all the demons who have wrecked his life, and get back his son.

The story is told through the opening cutscene, and ensuing cutscenes following boss fights throughout the whole game. You advance the story by collecting hidden runes, boss dialogues, and the ending cutscene. Grammar takes a hit, and you’ll wonder what Haggis actually meant by what he was saying. I suppose the localization team will get a good whipping, but everything is pretty intelligible, and only slightly confusing. There’s no need for you Grammar Nazis to sharpen your pitchforks right away.

It’s a pretty straightforward story with no unpredictable plot-twists, and no shocking reappearances of characters you thought were dead.

Staying true to its roots but also incorporating some more modern platformer elements, Odallus will feel like a nostalgia hit.

On his journey to brandish an iron sword to the one who took his blood and flesh away, Haggis can equip himself with sub-weapons like axes, spears, and torches. Axes are wielded in a straight line. Torches work similar to Simon Belmont’s holy water and throwing knives – torches ignite the ground in front of you. 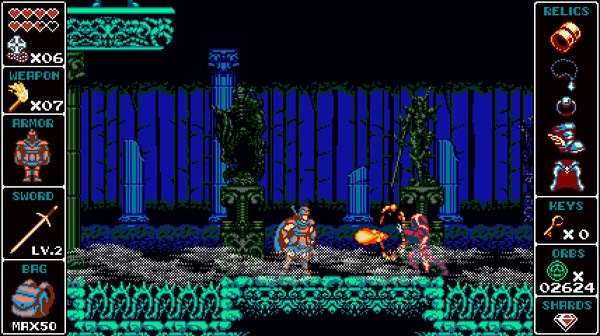 It’s a good thing that you can equip Haggis with sub-weapons, because you wouldn’t last a minute with the stock sword. It’s rather weak when comparing with your sub-weapons. There are certain enemies which require you to use your head and switch to the appropriate sub-weapon.

Sub-weapons can be found in various chests across the realm, or at shops. They can be bartered with collectable orbs that enemies drop when they die.

Beware, there is a merchant in the game, and whenever you buy something from him, his prices go up. Prices don’t lower once you defeat a boss, clear a stage, or whatever. They will remain high-up forever.

You keep all of your weapons in a bag, which can be upgraded to be able to hold more demon-slaying tools. Also, you can upgrade your health, sword, and armor by searching for upgrades which are hidden in near-impossible to reach places.

You have three lives. If you run out of them, you need to restart the entire level (not just the checkpoint). Odallus has 8 stages. Each one has its secrets and a boss. You can replay levels how many times you want, and whenever you want. But, once a boss has been defeated, he will stay vanquished.

Haggis starts with the ability to jump, and swing his weapon at enemies. If you get hit by a foe, you’ll be slightly knocked back. There are no insta-kills, nor are there death-pits like in Castlevania. Haggis also has the ability to grab ledges, and shimmy himself which makes for some quite entertaining strategies and puzzles.

As you play, you’ll be able to unlock the ability to double-jump, dash, and other actions that will make clearing a stage feel like a summer’s breeze – but those will most likely be available in late game.

Bosses in general have a predictable pattern, and they are easily beaten. The last one though, is totally random, and it will require a little bit more thinking on your part, but not something infuriating.

Bosses are exquisite – in both their lore to how they act and look. More so, JoyMasher fits everything in a dark, and gritty medium that doesn’t dwell in the absurd. It stays true to the Castlevania games by featuring a plethora of burning villages, and dark forests.

Odallus isn’t a huge time-waster. If you’re accustomed to the genre, you’ll clear it in no-more than 5 hours. If you want to take Odallus The Dark Call full on, and complete everything – as in everything collected, and every secret revealed – it will probably take about 10 hours max.

Our Odallus The Dark Call Review found this Metroidvania game to be quite entertaining, although a little bit easy for us die-hard fans. Developer JoyMasher notes that a harder mode will be available pretty soon for veterans.

If this has sparked your curiosity, you can get the game right now for a low $15: Odallus The Dark Call Download!

This review was based on the Odallus The Dark Call PC version. At this moment, the PC is the only platform it was released on. Fans around the world are trying to convince JoyMasher to release it on 3DS also. Personally, I think this game would be incredible on the Retro VGS.