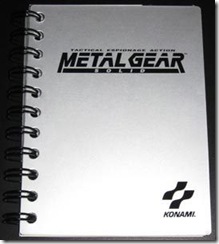 The last one sold for $130.02, so a $90.00 BIN isn’t too bad. The Metal Gear hype may have died down, but this is a pretty rare and hard to find item. While a lot of them may have been given away initially, it’s pretty much an item that it was too cool not to use it. For that reason I have a feeling not many are around now. It’s a great item for both a PS1 fan, or someone who is into the series.

If you missed our coverage of the last one, it has a metal cover on both sides, and includes six high quality artwork pictures from the original game and a bunch of blank pages to write or draw in. It was originally only available as a perorder bonus for the first PS1 game.

It’s also being sold by the Editor in Chief of TheBBPS.com, an excellent gaming blog.