While I’m sure that anyone who might be bidding on this game has long been aware of it, it’s one of those auctions that’s fun to watch.

For those of you unfamiliar with the game and the high price it reaches, here’s a history lesson.

The company Bandai was the original developer of the NES Power Pad accessory and it’s one accompanying game, Stadium Events. After being released in Japan (with more games), Bandai test marketed the accessory in the USA and renamed it “Family Fun Fitness” (the Japanese translation dubbed it Running Stadium). Its actual release was limited to only a small number of Woolworths department stores.

Shortly after the release, Nintendo of America purchased the North American rights to the Family Fun Fitness and decided to market it themselves. Stadium Events was also renamed and repackaged under the title World Class Track Meet. Despite the changes, the three games remain identical to one another, aside from the name change on the title screen. As a result of this, all Family Fun Fitness units and copies of the Stadium Events games were pulled from store shelves, making it without a doubt, the hardest to find licensed, released, game available on the Nintendo Entertainment System. There are estimated to be anywhere from 300-800 copies in circulation.

Loose cartridges currently fetch upwards of $1500 on eBay, and as high as $1775 USD.Â In June 2006, the only known factory sealed copy was auctioned off on US eBay for $3050, and in May 2007, a loose instruction manual for the game sold for $875. This might be something it would be difficult to convince a bank to give you a business cash advance for.

Apparently, There are less than 10 known complete copies in collector’s hands.

2011 Update: Ignore the numbers and pricing above, very not up t0 date. 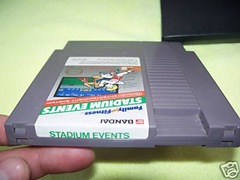 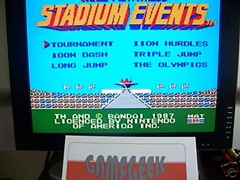