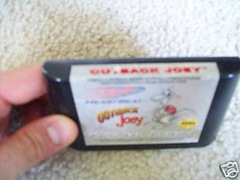 This is by far, one of the rarest Sega Genesis cartridges out there. It’s also one of the more interesting as well.

Outback Joey is the only cartridge produced to work with the Heartbeat Personal Trainer system. The system is a working Sega Genesis system that allows you to connect it to exercise equipment. It actually included specific hardware, that lets you use any type of treadmill or bike as opposed to requiring a specific machine.

Sega-16.com has an achieved version of an eBay auction for the complete system and game from late 2005 here.

Actual production numbers are unknown, but it’s believed to be less than 1000. Significantly less than that have shown up in the hand of collectors.