eBay seller donkey*kong has some great early Nintendo items up for sale. If you’re a Nintendo fanboy, or just someone who loves the history in these ancient consoles, than these are some items you should 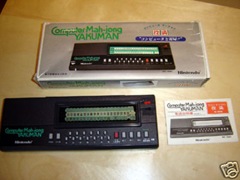 keep your eyes on. Obviously, these were all Japan only releases.

First you have the Nintendo Computer Mah-jong YAKUMAN handheld. This is a system with a LCD dotmatrix screen AND a multiplayer option if you own two systems as well as a special cable. That’s right, link up capability six years before the original Gameboy. That’s innovation. 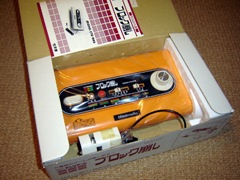 Next, we have a Nintendo Vintage TV Game, called Block Kuzure (Block Breaker). Block Kuzure (ãƒ–ãƒ­ãƒƒã‚¯å´©ã‚Œ) is an early Nintendo TV game, from the “Color TV Game” series, just like TV-GAME 6 and TV-GAME 15. It is clearly inspired by Atari’s breakout, but has some interesting game variations (6 in total). One of the best things about this system, is that the art design(casing and control panel) was done by none other than Shigeru Miyamoto, father of Mario and Zelda, in one of his first assignments at Nintendo. 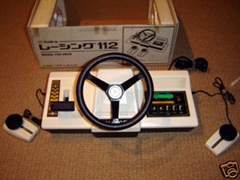 Lastly, we have the TV Game Racing 112. Released in 1978, this system is also from”Color TV Game” series. You can race with one (using gearshift and wheel) or two people (using paddles), and it has a number of game variations.