Ok, maybe the title is a bit misleading. But you can now make DRUM SOUNDS! 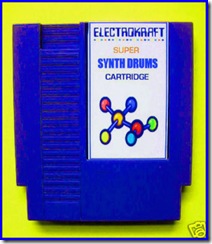 He’s created a cart however, that’s a little more complicated than just basic circuit bending. His own description sums it up well:

This is a genuine cartridge for use in the old original or new clone NES systems.

Create true 8 bit percussion synth from the real Nintendo NES using the controllers. You can use the original NES gamepad controllers, as well as the new 3rd party controllers made for NES, or the Yobo and Generation Nex clones.

Just pop in the cart and plug into an amp using an RCA to 1/4″ audio jack adapter, or just plug right into your TV’s RCA audio input for sound.

He’s also created a custom peripheral to use with the cartridge. He doesn’t seem to have one for sale, and I’m guessing this is the only one he’s produced thus far. He did have an auction for it, the cart and a custom system that ended up selling for $149.00. That seems pretty cheap to me, as I’m sure a hardcore NES collector would have paid much more. It seems his first attempt to sell the controller was here, with a $349.00 BIN.

Here’s a video of it in action. He may also have a “gameplay” video somewhere, but I couldn’t find it when I checked.

His website is here, but parts of it seem to down. Most likely by choice, due to the mass amount of random collectors hitting his site as this makes the rounds on the forums.