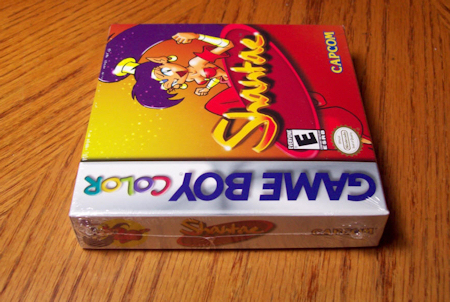 You guys are being spoiled with these rare sealed games. Today I bring you a Sealed Shantae for Game Boy Color (the asking price is outrageous, I know – the seller is probably looking to buy a house with the stuff he has listed)

Shantae was published by Capcom and came out on June of 2002 for the Game Boy Color a year after the launch of the Game Boy Advance in North America. Perhaps this great platformer would have survived if it was released on Nintendo’s new handheld system.

Matt Bozon, creator of the game, spoke with IGN in 2007 and mentioned that “When Shantae GBC was completed, it went to manufacturing, but then sat in the queue for 8 months while GBA took over the planet. Upon its release, it didn’t sell huge numbers but the reviews were stellar. While many publishers are willing to push the game, the lowly sales of the original make it a tough sell to the folks who crunch numbers, and the retailers.” He also mentioned that for them to sell more units, they would have to port the game on other platforms. In result, the game sold very little on the dying platform.

It not only serves as one of the best platforming games for the system but also one of the rarest. I sold a personalÂ “cart only” copy last year for $90. Recently there’s a complete copy that sold for $275 and a cart only for $100. It’s hard to find a copy of this game in the wild and ebay is probably your best bet (or gametz?).

Too bad Shantae Advance was cancelled. It would have been a great game as well. I wonder when that demo will pop up on ebay?

a case of sealed Kirby’s Adventure