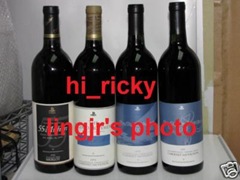 Sony seems to have a thing for wine. Over in Japan there have been several bottles produced for successful game launches, company milestones and achievements. None of these have ever been offered for sale publicly (to my knowledge) and are reserved for internal management (sometimes employees) and business partners.

Included are bottles which celebrate:

All of the images from the auction are broken with the exception of the one included in this post. I’ve contacted the seller though and hopefully he will address this. For such a pricey auction a few pics aren’t much to ask for.

If this is actually something you’d be interested in, I know of someone who has two of the wines (Playstation Awards & Second Movement) plus a Konami wine which he would be willing to sell for less than half of the asking price of the above auction.