The letters PSX are often used to abbreviate the Playstation 1. However, it’s also the name of a quasi console that was released in Japan.

The PSX was a Sony digital video recorder with fully integrated PlayStation and PlayStation 2 support. Since it was designed to be a general-function audiovisual device, it was marketed by the main Sony Corporation and was released only in Japan on December 13, 2003.

The PSX is a fully functional digital video recorder with RF, S-Video and composite inputs. It is able to tune analog VHF and CATV. It comes with a remote control and can be also linked with a PlayStation Portable to transfer videos and music via USB ports. It also features software for video, photo and audio editing.

The PSX doesn’t include a controller. A special ceramic-white, USB DualShock 2 was released separately. However, original DualShocks are fully supported by two joystick ports in the back side and memory cards are also supported via port in the front side.

The DESR-5000 and DESR-7000 were launch models and featured a 160 GB and 250 GB HDD. Later improved DESR-7000 models were launched in 2004 with bigger hard disk and supporting improved vibration function, and editing tools.

The auction has ended (no bids) and the seller says they have a large number of them. Zero feedback seller though, with an poor stock photo. 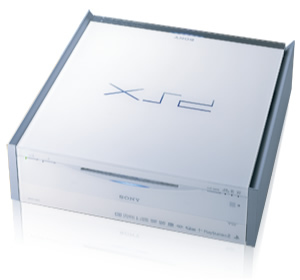 Nintendo Dolphin NPDP-DEV Gamecube Development Kit – Yet another auction that has become boring.