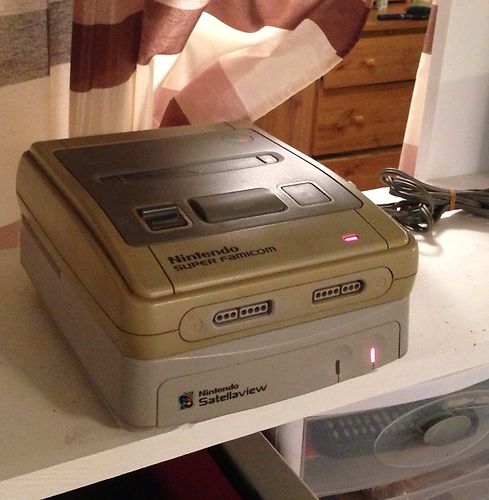 Perhaps the most famous of Nintendo’s console addons next to the N64DD, the BS-X Sattelaview was a revolutionary device that supported game and content downloads in the pre-Internet world, much like Sega Channel. Unlike Sega’s cable-based strategy, however, Nintendo decided to take another option – sattelite transfer, via a now-defunct Japanese sattelite company named St. GIGA. For a fee each month and the cost of renting a St. GIGA dish, users could download games or even participate in games that featured real-time voice acting broadcasted by sattelite (due to the real-time nature of this voicework, however, these events were only available during certain times of the week). While the actual Sattelaview unit is now without the St. GIGA service it requires, many of the Sattelaview games (often with “BS” prefixes) have been dumped in a working form, and some enthusiastic emulator nuts have even gotten the Sattelaview BIOS to “download” these ROMs from a user’s hard drive. Comes with a yellowed Super Famicom that can be cleaned up with a bit of Retr0bright.

NINTENDO NES Original 1985 Advertising Sign, with 3 Vintage Rotating Motives – Absurdly expensive, but I’ve never seen a video game advertisement like it before: a rotating sign that can create three pictures by spinning its triangular “motives”. A lot like the signs you see at bus stops or sports stadiums – if it’s worth the price to you, there may not be one like this again any time soon

Xenosaga Episode I Premium Box PlayStation 2 – I Can’t Believe It’s Not Metal Gear! This time, we have a premium box of Xenosaga Episode 1, complete with the game, a keychain, binder, art book, and an exclusive KOS-MOS figure

Vintage mario and zelda pin set – Likely a complete set (unless any have fallen off), this looks like it was used as a store display

metal gear solid Jp promo piolt disc sealed – A “Pilot Disc” version of Metal Gear Solid for the PS1, this disc actually contains an early beta with all sorts of cut content goodies to be found (if you’re willing to do a little looking)

Ocarina of Time Figures – Link, Ganondorf and Zelda – Although the famous Link Figma is by far the best Link figure to be made yet, this set has probably the only figures of OoT Zelda and Ganondorf we’re ever going to get

BLOCK Set Robot Famicom – ROB’s Stack Up blocks, but in Famicom white rather than NES gray. To be used with the Japanese ROB, but likely compatible with an American one if you can’t find a complete American Stack Up set