Been looking at some vintage clothing these days and figured you Sega fanboys would appreciate these three. 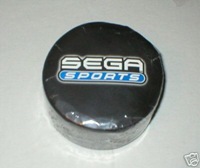 First, we have a relatively new item. This is a new sealed Hockey Puck/T-Shirt promoting Sega Sports.

A couple of years ago, Sega sent out some promotional T-shirts to promote a hockey game (no idea which one), sealed in a package in the shape of a hockey puck.  It has a cardboard insert on top of the tightly packed shirt with the words “Sega Sports” on the insert.  Only 0.99 with no bids. 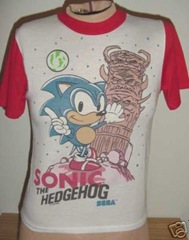 Next, we have a nice Sonic The Hedgehog Tee from 1992. I’m not feeling the leaning tower of evil there on the side though. Was that something that was actually in a Sonic game? I was a Sega man myself during that era, but can’t seem to recall anything that would make sense. 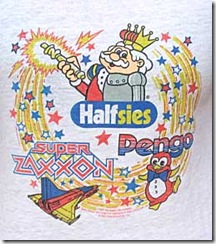 Last, but definitely not least we have a much older shirts that promotes two games and a food.
What? Yeah, I asked the same question.

With shots from both Zaxxon and Pengo, this must have been some odd promo item from back in the day.

Halfsies (if you’ve never heard of them like me) were a breakfast cereal manufactured by Quaker Oats from 1983 through 1984. They were the result of the so-called “sugar backlash” in which the amount of sugar in children’s breakfast cereals became an issue. The premise was they contained half the sugar of regular breakfast cereals, and that they were half-corn and half-rice. The cereal nuggets were shaped as half a normal cereal ring, like the letter C.

They were corn- and rice-base and, essentially, were Cap’n Crunch (another Quaker Oats product) with half the sugar and a slightly different texture. No wonder they were discontinued.\

Definitely a unique item, probably one of a kind by this point. Not a bad price for a $15.00 BIN in my opinion.