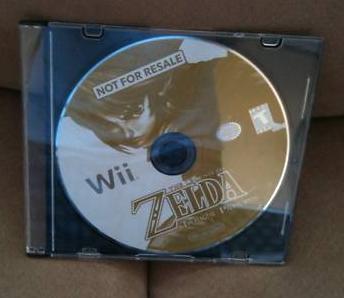 -This may have been used elsewhere, but this Zelda Twilight Princess Not for Resale Disc is said to have been used at E3.Â The seller states: This Zelda demo disc is one of the rarest Wii games as it showcases the first two playable demos ever shown for the Wii at E3 2006. Â This demo has a menu system unique to it’s particular build and may never find its way to eBay again.Â Â Â EDIT: Judging from the comments posted, this was widely available and used in Wii kiosks as a store demo. (Sold: $162.50)

-An autographed copy of Bill Elliot’s Nascar Challenge for the NES.Â The point being that probably makes this legit is: who would want to fake this?! (Sold: $27.66)

-Get quirky and hygenic with some hand made Space Invaders Soap

–Someone got lazy and decided to put NicolaÂ up for auction again.Â The nerve of some people! (Sold: $8.37)