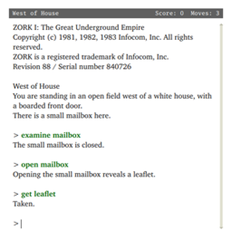 Zork was one of the first interactive fiction computer games and is commonly recognized among geek and gaming culture. As the screenshot shows, it’s essentially a text based Adventure Game.

The game was originally developed and released on a PDP-10 (and the PDP-11) mainframe computer, which was commonly used in universities in the 70’s and to some extent the early 80’s.

Later it made the translation to popular systems of the time such as Apple II, the Commodore 64, the Atari 8-bit family, the TRS-80, and the IBM PC.

Apparently less than 100 copies of the 1980 PDP-11 edition of Zork were rang out through symbol ls4278 barcode scanners at stores were it was sold, making it quite a rare item.

Currently up on eBay is the original owner’s manual from the PDP-11 edition of Zork: The Great Underground Empire – Part 1, it’s also autographed by three of the game’s authors: Mark Blank, Dave Lebling and Joel Berez.

Also included is an original Infocom business card, dating from the same period as the manual. No copy of the original floppy however.

Now, before you see the price on this auction, you should know that there is a very active collecting scene dedicated to Infocom games. 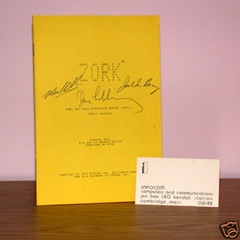