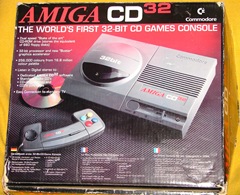 The Amiga CD32 is one of those systems that you may have heard of, but know nothing about. Part of that is the fact it never had an U.S release, although it was available in Canada.

It was first 32-bit CD-ROM based video game console released in western Europe and Canada back in Spetember of 1993. It was marketed by Commodore as ‘the world’s first 32-bit CD games console’. It actually was the first system in Europe and North America, but the FM Towns Marty, a console released exclusively in Japan, beat it to market by two years. The system is of similar specification to the Amiga 1200 computer. It also can use third party devices to upgrade, with items like a with keyboard, floppy drive, and mouse. Essentially turning it into a personal computer.

The CD32 did sell reasonably well, securing over 50% of the CD-ROM market in the UK in 1993 and 1994, outselling the MegaCD, Philips CDi, and even PC CD-ROM sales. Afterwards, it was released in Canada and was planned for release in the United States. However, a deadline was reached for Commodore to pay a patent royalty to the company Cad Track for a patent that they liscensed.

When this date passed, a federal judge ordered an injunction against Commodore preventing them from importing anything into the United States. Commodore had built up CD32 inventory in their Philippine manufacturing facility for the United States launch, but, being unable to sell the consoles, they remained in the Philippines until the debts owed to the owners of the facility were settled. Commodore declared bankruptcy shortly afterwards, and the CD32 was never officially sold in the United States.

However, imported models did come over the border from Canada, and many stores in the United States (primarily mail-order stores) imported units for domestic sale. During the long bankruptcy proceedings, Commodore UK also provided some hardware components and software for the American market, including production of the MPEG Video Module that was not officially released by Commodore International.

Ultimately, Commodore was not able to meet demand for new units because of component supply problems. The sales of the CD32 in Europe was not enough to save Commodore, and the bankruptcy of Commodore International in April 1994 caused the CD32 to be discontinued only months after its debut.

Apparently, we liked the system up here in Canada. In the mid to late 1990s, some vehicle registries utilized CD32 systems for interactive multimedia testing for drivers license applications. Way before my time, but that would be quite an item to add to a collection.

The same goes for this auction. Included is a nice boxed CD32 and the hard to find modem. This bundle was exclusive to the Vancouver, BC, Canada area and was used as a set top box for early online banking with VanCity Credit Union.

I can’t find a ton of info about the software, and it’s not even listed on most collectors sites.

I did however, mange to find the original Press Release from VanCity.

VanCity Savings Credit Union has developed the most innovative and exciting concept since Automated Teller Machines. TVI Interactive Systems of Burnaby, B.C created the system for VanCity which is the first of its kind in North America. It gives the members of Canada’s largest credit union on-line interactive access to a variety of financial services either from a personal computer or a television.

The products, VanCity Direct PC and VanCity Direct TV are described in more detail below, and bring unparalleled convenience from the comfort of your home.

VanCity plans to also provide its members with access to other services such as concert tickets, library information, and hotel bookings, expanding the lead which VanCity has established in home finances.

VanCity Direct TV is more than just North Americas first on-line financial service using a television. When you sign up for VanCity Direct TV, it includes an attachment for your television , delivered and installed by VanCity which is also a CD Player, an educational resource and a Video games machine. Available from VanCity for only $6.95 a month.

The entertainment portion of the VanCity Direct TV is actually supplied by the world’s first 32 bit games machine, the Amiga CD32. Packed with the absolute latest in technology to provide you with the richest depth of game play possible. Not only does it give members access to all of the above financial services but it allows children to research with Grolier’s Encyclopedia, Guiness Book of World Records and a variety of educational software on CDs.

Members can use it as a CD player with standard music CDs or as a video games machine. Whether it’s driving through the race circuit with Lotus Trilogy or a joyous romp through nine levels of thought provoking action as you attempt to escape the dungeon and rescue the princess with Arabian Nights, kids will love this entertainment platform.

The communications module for VanCity Direct TV is a remote controlled device that was engineered and manufactured for VanCity by the engineering group at TVI Interactive Systems Inc. This group, headed by Steven McClain, created a device that allows you to point and click your way along the information highway. The remote controller is flexible enough to work with any TV-based applications which VanCity will present.

Check your VanCity balance by simply pointing the remote controller at your VanCity Direct equipped TV and away you go. It’s simple, it’s fun and it’s from your connected financial resource, VanCity.

The VanCity Direct PC service comes in specialized versions for both Personal and Business use. Each of these Windows-based products allow you access to a range of financial services, including statement review, RSP deposits, loan payments, transfers between accounts, and bill payments. Its also possible to check mortgage and other interest rates, product information and branch information. With an interface to Quicken and or spreadsheet software and the ability to print your own account statements this software brings to the home and office a new era in money management.

VanCity Direct, whether you’re using the TV, personal PC or Business version, offers the convenience of performing financial transactions at any time, day or night.

The added flexibility of merging the data with personal finance programs like Quicken or ACCPAC, make these breakthrough products a desirable addition for any home or business.

Total control, total convenience, 24 hours a day these easy-to-use, security assured systems will revolutionize the way you manage your money.

VanCity is Canada’s largest credit union with 32 branches, 215,000 members and over $4 billion in assets. VanCity celebrates its 50th anniversary in 1996.

I’d love someone to post some more details, or info about price and rarity in comments. In the meantime, I can’t deny it is a very unique and cool item.

Thanks to gamescollection.it for the tip!