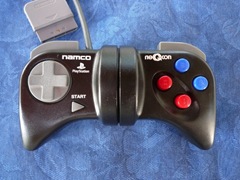 The neGcon was a third-party controller for the Sony PlayStation manufactured by Namco. Apparently, they did not sell overly well and were available for as low as $5.00 from several large retailers while they were being blown out. Even given this, there is never a ton available online. This back version is much rarer than the white version however, and is slightly smaller.

The neGcon was an unusual design in that the left and right halves of the controller were connected by a swivel joint and thus the halves could be twisted relative to each other. The full extent of this twist was available to the console as an analogue measurement.

Also unusual for its time were the buttons. The regular PlayStation controller of the time featured all-digital controls with a D-Pad on the left; R1, R2, L1, and L2 shoulder buttons; triangle, circle, square, and X buttons on the right; plus select and start buttons in the center area of the controller. The neGcon removed the L2 and R2 buttons as well as the select button. The neGcon replaced the digital circle and triangle buttons with digital A and B buttons, and also replaced the R1 shoulder button with a digital R shoulder button. The neGcon featured the digital D-Pad as one area similar to competing console’s controllers and unlike the plus-shaped configuration of the official PlayStation controller.

The design of the neGcon, while initially seeming very unwieldy, was in fact very good for racing games. The analogue â… and â…¡ buttons were typically used as the accelerator and brake, and the swivel in the middle was used as steering input. Because analogue input provides better control in racing games, these controllers are now quite sought after for certain games, as the times achieved are nigh unbeatable on a standard controller.

The neGcon could be gripped with the fists facing forward and the thumbs upwards, as if holding the edges of a bowtie steering wheel. Twisting the arms at the elbows would turn the hands around a circle, as well as twist the wrists relative to each other, producing steering input. Although this was the most natural way to use the controller, the twisting of the right wrist would move the thumbs a bit and inadvertently modulate the gas and/or brake inputs. Because of this, most users would migrate to a different grip over time, one where the right hand stayed stationary and modulated the gas and brake, while the left hand twisted the left half of the controller to modulate the steering.