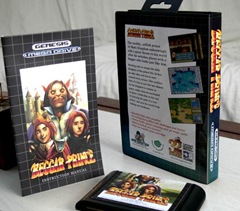 I have to admit that the Sega Genesis has a soft spot in my heart. I grew up with the system and it’s always been a few steps ahead of the SNES for me. I know I’m definitely not in the majority there, but I also know I have fellow Genesis disciples floating around somewhere.

That why I was so excited when Beggar Prince was announced a few years ago. It was to be the first North American commercially released game for the system since 1998. The NES had a growing homebrew scene, the Atari 2600 had tons of new release and now, finally, Sega was getting it’s turn.

Beggar Prince was originally known as Xin Qigai Wangzi and is a Taiwanese game first released by C&E Inc in 1996. SuperFighter Team (the company behind Beggar Prince), essentially licensed the game and localized it for an American audience.

Ignoring the game itself for a minute, it’s obvious from the packaging this was not a release taken lightly. The game comes complete with full color 27 page instruction manual, plastic clamshell case and color insert. Everything is professionally produced in the authentic style of an official Sega release. It looks amazing.

The game itself? Well, I’m not someone who is big into detailed reviews. The bottom line is that the game is fun, enjoyable and a nifty little RPG for a console that has only too few in the genre. The game world is huge and the game has a solid 30 to 40 hours of gameplay easily, hours which I logged happily.

It’s one of those games you’ll want to own as a collector AND as a gamer to actually play.

Even better, they’ve got their second release slated to ship any time now. It’s yet another RPG, this time called Legend Of Wukong.

If you’re a Genesis collector, or even just a fan of retro PRGS, than Beggar Prince is worth a shot. Plus if the first game is any indication, the release of Legend Of Wukong is going to be a great addition to the Genesis Library as well.