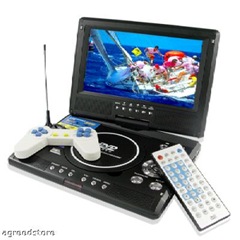 I randomly stumbled across these today and I’m actually pretty annoyed. I just recently bought a strap in DVD Player/Screen for my son (Bob the Builder is a savior on long trips), but you can bet your last dollar I would have been all over one with a built in NES Emulator.

Now to be honest, I’ve heard of stuff like this before… ages ago. I believe there was even a player that played Sega games in the early 2000’s. Just for some reason I had forgotten about it. It’s easy to do that when it’s so easy these days to get emulation on the go, all it takes is an iPhone, DS, GP32, Palm Pilot, etc.

Now the features are these are pretty snazzy. I don’t know about the image quality, as with a 7 or 9 inch TFT LCD, you pretty much need to see it in action before you pass judgement. Aside from the NES Emulator with hundreds of games on CD and two controllers, it included a USB slot to play digital files (must have these days in my opinion) built in FM transmitter for sending sound directly to your cars audio system and AV OUT and IN for auxiliary monitor and speaker connections.

I can’t find a full review on a unit, but I did stumble across this thread on DigitPress. According to two different posters, the unit does experience slowdown and bad framerates. From 25 to 75% depending on the game. The disc included is mostly made up of hacks, and only has around 150 unique games, with the same amount of doubles. It’s also said that the sound is horrible.

For you techies, the games as is aren’t compatible with a regular NES emulator. According to one poster, the ROMs are just regular .NES files minus the iNES header. They won’t play as is, but it is possible reconstruct them if you know what mapper they use. Another poster mentioned that they can’t figure out a way to get traditional NES roms on there – something I would love to tackle.

The main seller I looked at has pretty decent feedback, especially given the volume he sells. So I’m guessing these are decent electronics… even if the NES Emulation itself isn’t that great.

There’s not cheap though. I think I picked up my double set for roughly $150.00-$170.00 at Wal-Mart. They’re just strap in units, included one Player/Screen combo and a second screen. No media slot.

The ones I was looking at here run $169.99 for a one headset built in version, $319.99 for a two headset version, and $229.95 for a laptop version with a larger screen. While the seller is in the US, the auction states that the items are shipping from overseas so that throws up the shipping costs as well.

I’d really like to give this a go myself however, so I’ll see if I can get my hands on one to do a full review.