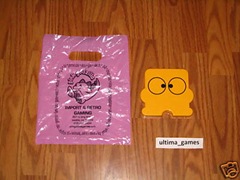 The KIDK-KUN games are almost the Famicom equivalent of the Nintendo World Championship cartridges, although much more common in theory.

Back in 1987 Nintendo ambitiously wanted to link all of Japan’s Famicoms through a network similar to a much simpler Internet. To test out the system, Nintendo put off competitions where participants got to play Disk System games and then submit their scores through a faxing style system. Each of the competitions had a specific prize, all in the yellow plastic case in the shape of Disk-Kun (the Famicom mascot).

One of the Golf Prizes is currently available. The seller states:

Up for auction is an incredibly rare, brand new condition Famicom Disk-Kun Gold Japanese “Golf” Prize Card!  This was the first place prize in a videogame tournament held by Nintendo of Japan in 1988.  It is esteamated that less than 100 were ever made.  The Disk-Kun case itself has some very light contact scratches, but the Gold game disk inside is completely brand-new and untouched.  I bought this in person from a Famicom collector at the Penny Arcade Expo 08′ (PAX) in Seattle, WA.  Everything will be shipped immaculately to ensure that you receive it as it is!  Pictures are of actual item, good luck! 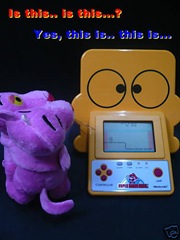 Those numbers however may be off. FamicomWorld states:

The first tournament prize was the gold Golf Japan prize card (FSC-GSJE) and Disk-kun case, white box, and letter. The number released to the public is likely 10,000 — though that number has not been confirmed.

This is often one of the more expensive tournament prizes because both Famicom and Game & Watch collectors want to get their hands on these. This has fetched over $2,000 before, but that was for a complete almost new version with all the original papers. This one should go for much less, although I am unsure how much one will go for these days.