I do apologize for this one. I wanted a contest that made last years PS1 contest look easy. I think I have succeeded. It’s easy enough to start off with, but there are a few tricky ones here. If anyone solves this quickly, my hat is off to you.

How Do You Win?

When I was moving my NES games I accidentally dropped them! It was horrendous. My games all still work, but the sprite carnage was unbearable! Help me sort everything out so I can get the characters where they belong. 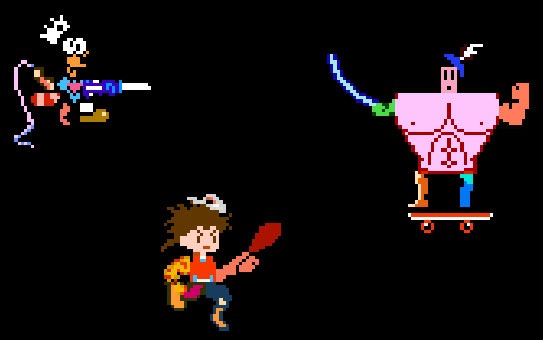 Simple figure out all of the games that are present above and post a complete list. Game title is preferred, but character name is fine as well as long as you can tell me what series they appeared in. This is just in case I pulled a sprite from Random Game 3, but the exact same sprite is in Random Game 2.

Post your answer in the comments below. YOU MUST BE A REGISTERED USER. Thatâ€™s the only way I can confirm youâ€™re the person who posted and make sure you get your prize. Go here to register.

Also, it is theoretically possible that developers reused parts of sprites in their games, making it conceivable that something here could be from two totally unrelated games. If I state you did not win, but you can prove you are correct, you can end up winning if no one else has won yet. If you can prove you are correct, posted your answer first, but someone else has already posted the answer I was looking for before you can find proof, I will make sure you get something.

Each user is allowed two official guesses. This means that the contest should get easier as time goes on. There’s no restriction on discussion however, although you’re probably helping your competitors.

So, for this brutal contest what do you get?

Well for starters, the one of a kind gameSniped.com Edition of the LE XMAS Cart from RetroUSB, a Lifetime Subscription to Chase The Chuckwagon, an ONE YEAR SUBSCRIPTION to the NintendoAge.com Price Guide and a NES Repo Box Prize Pack (with NWC Repo Poster) From Uncle Tusk and a box of NES VHS Videos and NES elated goodies from yours truly.

The LE XMAS cart is one of my favorite prizes this year, and should be quite a trophy for the brave should that manages to pull this one out.

Also, I will provide hints if I have to for this one, but not until at least 24 hours go by. Same with guesses if this goes over that time I’ll allow more.