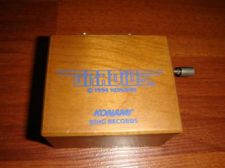 Here is a neat promotional item. Â The seller states in the description “Â It was an early 90’s promotional item and you couldn’t buy this in stores in Japan. The way someone would obtain this Music Box is through King Records Japan by sending in application tickets from three King RecordsÂ GradiusÂ CDs. It plays the ending tune from Gradius 2 “Farewell”.” – Very cool!

Hitchhiker’s Guide to The Galaxy CIB

Leisure Suit Larry in The Land of The Lounge Lizards CIB

Mean Streets for DOS Factory SealedÂ – One of the first games to use 256-color VGA graphics, as well as “RealSound” Technology which utilizes the PC speaker for Â high quality digitized voice, music, and sound effects without any additional hardware.