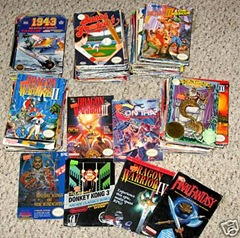 How? Show him this auction as well as this one. The first is for 200 NES Boxes and the second is for 250. Included are lots of nice hard to find ones; Dragon Warrior II, III, IV, Final Fantasy, Donkey Kong Jr. Math, Contra Force, Megaman 5, Megaman 6, Wally Bear, Qix, Namco Ms. Pac Man, North and South, etc.

One catch though. They’ve been butchered.

You are bidding on 200 (based on a hand count) NES store display cards from a long defunct urban Mom and Pop video game store was very successful during the heyday of the NES era of the late 1980s and early 1990s.  These cards are cut from the ORIGINAL NES BOXES.  Each card contains both the front and back of a game box, and most are sealed in cellophane.

They cut up the boxes to make display cards for their rental cases. Sad times.