The Mega-Tech system was an arcade cabinet released by Sega in 1989. It was similar to Nintendo’s PlayChoice-10 in that it was esentially home based hardware converted to an arcade machine. It allowed players to choose Mega Drive / Genesis games (eventually a few Master System games were ported too) from a menu of eight titles, with credits buying more play time (usually 1 minute per credit) rather than extra lives or continues. If you dies or finished a game you could start over or choose a different game as long as there was some play time remaining. The Mega-Tech was not released in North America, though ir did see use in Asia and the PAL regions.

The unit features eight internal cartridge slots and was tweaked to disallow cheaper retail Mega Drive games to be used. Likewise, Mega-Tech games will not run properly on a home console (and as the cartridges use the Japanese Mega Drive mould, they will not physically fit into western systems). The cabinet uses two monitors, one for the game on bottom and the top screen displays information including gameplay time remaining, the list of games available, gameplay instructions, and a short synopsis of each game.

The Mega-Tech launched with some of the best titles available at the time, including Thunder Force II, Altered Beast, Tetris, Last Battle, Space Harrier II, Golden Axe and The Revenge of Shinobi. Other popular Mega Drive games became available as time passed, such as Sonic the Hedgehog and Sonic the Hedgehog 2. Apart from providing additional data for the top screen the games were unchanged from the original releases, so cheats still worked and extra lives or continues could be collected during play.

After the Mega-Tech came the Mega Play, which reduced the game menu from eight to four titles and changed to a more standard system of credits buying lives/continues rather than time. Mega Play games were heavily modified due to this, with cheats and extra lives no longer being available. The Mega Play cabinet shares many features with the Mega-Tech one but the cartridges are not interchangable.

The games are sold pretty infrequently. These are the only one avilable at the moment and since this time last year, there have only been a handful of games sold. Shadow Dancer for $69.95, Streets Of Rage for $80.99, Spider-Man for $42.00 and World Championship Soccer for $34.99. 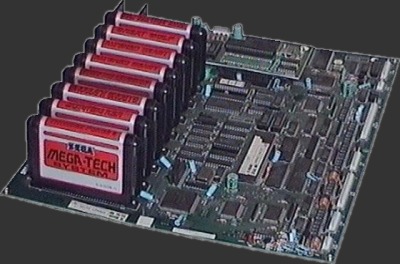 Megatech Brochure – Look at the images in the auction or below. God this thing is hideous.
Sonic The Hedgehog Marbles
Sega French Pinback
Sonic The Hedgehog / Sega Game Gear Christmas Ornament
Sonic The Hedgehog Complete Card & Sticker Set – Topps 1993set features 33 cards & 33 stickers.Cards show Sonic (and sometimes Tails) moving through each level with the different challengers that must be overcome. The backs of the cards give tips & strategies. Quote: The 33 sticker cards feature Sonic just hanging out being cool!
1997 Sega Sonic Sound Flash Yo-Yo – This things is so gaudy it goes past that and somehow becomes classy.