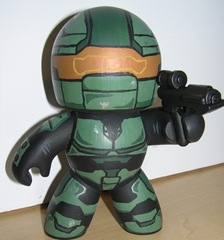 Most of you may not have heard of Mighty Muggs. Well, they’re a toy line produced by Hasbro to capitalize on the popularity of Designer toys (aka Urban Vinyl). They seem to be inspired by these toys, but come with a much lower price tag. Each figure is about 6â€³ tall and looks amazing. Itâ€™s one of those toy that kids will want to play with and adults will want to collect. Even the box is worthy of display.

They range in price from $9.99 to $14.99 and are available at Wal-Mart, Toyâ€™s R Us and Target. It also looks like they will be doing a variety of exclusives at Conventions and for other events.

So far they have Marvel figures, Indiana Jones and Star Wars. What’s next I wonder? Maybe a dedicated Video Game Line? In the meantime, I can dream with this Custom Halo 3 Master Chief Mighty Muggs.

Oh, and if you’re interested in more cool action figure stuff, check out out sister site, figSnipe. We’re looking for contributors as well, so feel free to drop me a line if you love action figures!

For more Muggs info, check out the Custom Mighty Muggs blog, or the the Mighty Muggs Forum. The forum has a contest going right now where you can win over $250.00 in prizes!