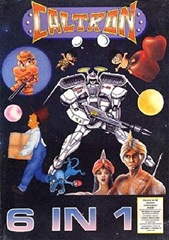 The Caltron 6 in 1 is an unlicensed Multicart published by a Taiwan-based video game company of the same name. It was published back in 1992 in North America by Caltron itself, and in Australia by Home Entertainment Suppliers (HES). It’s the only game the company released, which may be a negative for collectors, but it’s defiantly a positive for gamers.

The 6â€“inâ€“1 consists of six different games of various genres – Cosmos Cop, Magic Carpet 1001, Balloon Monster, Porter, and Bookyman. All of the games are horrible, although quite a ways from being Action 52 horrible.

Adam and Eve is single-screen platform game similar to Balloon Fight, in which you have to kill snakes by bursting the balloons attached to their heads.

Magic Carpet 1001 is a horizontally-scrolling shoot-em-up.

Balloon Monster is a clone of the game Buster Bros.

Porter is a puzzle game in which you have to move boxes into a specific place. 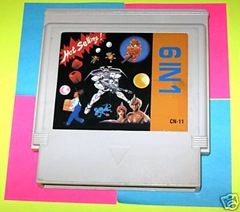 There are two of the carts currently up for auction. One on eBay for a $300.00 BIN, and another on Chase the Chuckwagon currently at $175.00 with two days to go. The $300.00 is slightly pricey, but with the NES Scenes tendency to go up in price and with Christmas around the corner, I expect it to sell eventually.

Even more interesting is what happened to the remaining stock of games after Caltron went out of business. A company called Myriad Games, Inc, (of which little is known even today), bought all of their carts. They then took the carts and slapped a very generic looking label on it and packaged it in equally generic boxes with a fold up manual. Both the cart and boxes were individually numbered and distributed with matching numbers. 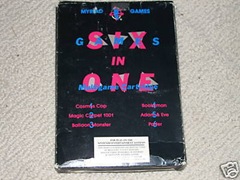 Since Myriad Games simply placed their own label over the Caltron carts, the game is exactly the same. The title screen of the game even still says Caltron. The game has become the rarest unlicensed game and arguably the rarest game ever released for the NES (Stadium Events falling closely behind).

Both the Manual and Box for the Myriad 6 in 1 recently sold one eBay. Looking at the closed auctions here and here, you can see that adding this one to your collection isn’t something taken lightly.