If you picked up on Nicola’s excitement at discovering a replica Sega Neptue console, you may be curious as to what this system actually is. Well, I’ll save you the trouble of Googling.

Apparently, Sega had admitted how expensive and problematic the 32X was, so the decision was made to make a combined version of the Mega Drive/Genesis and 32X. However, by the time a prototype came out, the Sega Saturn was ready for release. Sega felt that consumers would not be interested in the Sega Neptune, and so the project was then scrapped.

Several sources on the web state that there are several prototypes, with at least one was declared to work.

However, to my own knowledge I only know of the system contained within the CGE Museum. While many sites refer to this as a working prototype, I’m rather sure this is just a plastic mockup shell with no internal parts. 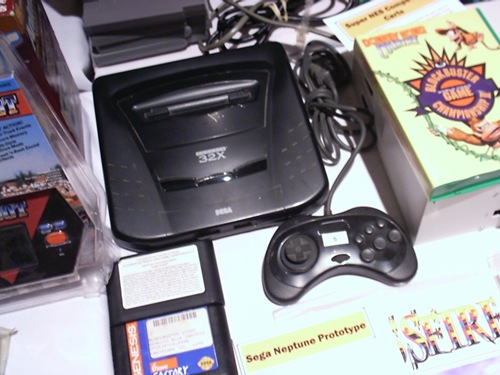 If you’re interested in cobbling together your own system, than check out this site.