I forgot that these existed, and while refreshing my mind I can actually find very little information on it.

The Quickshot sighting scope is an accessory produced originally by Quickshot Supervision. The full title of the scope is: QuickShot QS-132 Sighting scope. It was manufactured in China, and was Q.C. Passed (Quality Checked). It is also known as a Deluxe Sighting Scope. The scope itself in a greyish colour and is very detailed with fake screws.

The Quick shot sighting scope clicks onto the Nintendo zapper quite easily. The plastic plugs click into the zappers’ holes. The scope has an adjustment mechanism which is even rarer than the scope itself. Finding a complete scope and adjuster is hard. One person I’ve found claims they’ve only seen one complete scope in siz years of running an eBay Gamestore, which sold for roughly $150.00.

The adjuster is a red sliding-mechanism which is used to tilt the scope up and down according to the distance from the TV. It goes from 3 – 20 Feet. The scope has no internal glass, but there is a cross in the middle of the plastic tube.

There is one available in an eBay store currently for $99.99 including the adjustment mechanism. 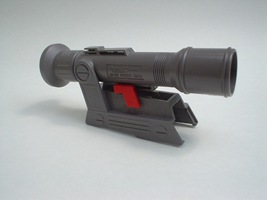 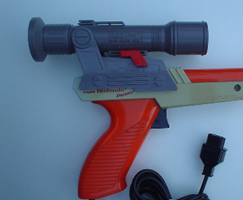