I have a great list of items for you guys to check out. These are some really cool and rare items (such as this increasingly difficult to find Pikachu Game Boy Advance SP). Many of the games in these listings are rare, valuable prototypes. These are all available from ebay user retro.nintendo.games (thanks for the heads up Sander) and are shipping form the Netherlands. These listings are all ending within the first two weeks of August, so you shouldn’t wait too long if you’re interested in picking up any of them.

I’m going to start with one item in particular because it seems to be such a timely item. Just about everywhere you look nowadays on social media and in the world around you, you see people hunting Pokémon (and sometimes you’re doing the hunting yourself, it’s okay to admit it), so considering the Pokémon GO craze going on right now, here is a very special Game Boy Advance SP. This isn’t just any old Game Boy Advance; it is a Pikachu Game Boy Advance SP. Made in bright yellow with Pikachu’s smiling face on the front of the device, it was available in limited numbers exclusively from Toys R Us a long time ago (I wasn’t able to track down the exact year it was released). This bad boy has a VGA grade of 95 MINT, is in brand new condition, AND factory sealed. This is something you don’t see too often. 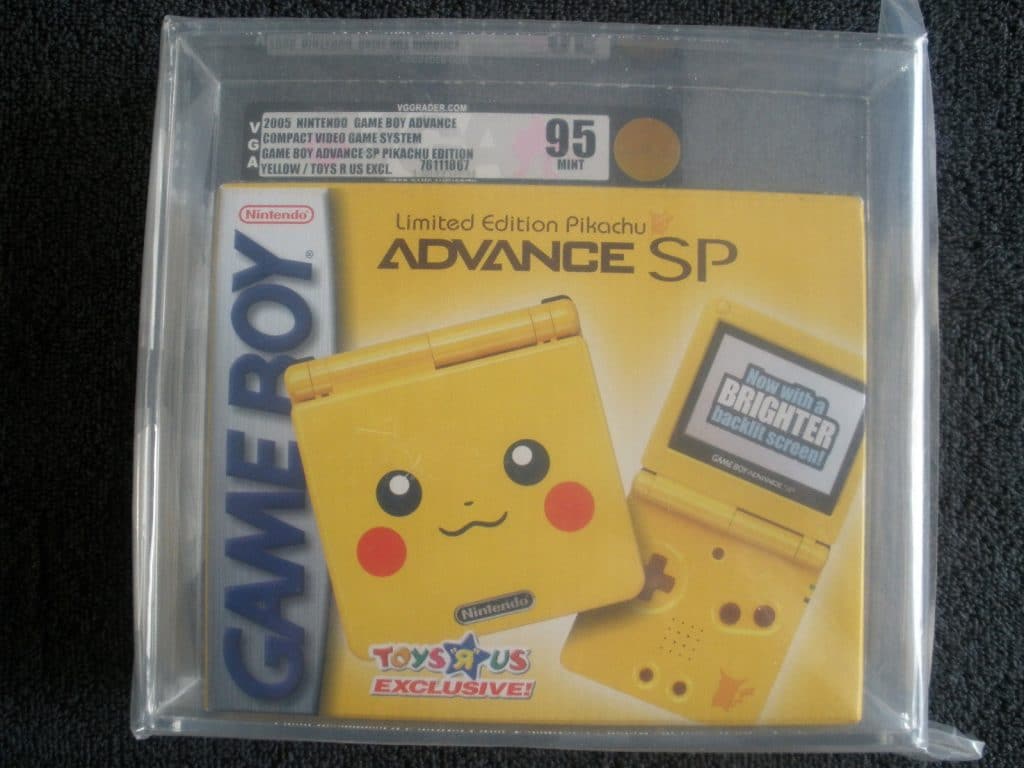 The next items up are a few of prototypes. The first is an unreleased prototype for classic Game Boy called Death Track. The seller bought this from an Activision employee who worked on this game, but the game never made it to release. The second prototype is for SNES, Metal Combat Falcon’s Revenge. This 1993 shooter game is not too difficult to find, but a prototype is a great find. The final prototype I want to tell you about is Amazing Tater Atlus. It’s another Game Boy classic game, this one is a puzzle game dating back to 1991. You can also pick up the Amazing Tater Instruction Manual. This is the original manual that came with the game (still in fairly good shape), it’s by itself here though so you can buy the prototype of the game and get this manual to go with it.

There are a few more games on this list. Yet another Game Boy classic game, Cool World. You can find the Brad Pitt movie that the game is based on all over the place; the SNES game is also pretty easy to find, there are even a few NES games out there, but the Game Boy classic game is a little tougher to get your hands on. One of the other games is a classic Nintendo 64 game called Paper Mario. This listing for the 2001 RPG has a VGA 85+ GOLD grade, is factory sealed so it’s in great shape (almost mint). Last but not least, we have a SNES CIB Space Megaforce game. A 1994 shooter game, the box for this ToHo Co., Ltd. Game shows some wear around the edges and the instruction booklet looks like the cover was folded in a couple places at some point but otherwise appears to be in good condition.