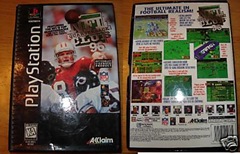 You may remember the Playstation Museum for their Space Hulk Longbox back in September. Well they have a few items up for sale again, this time with the proceeds going to charity.

The most interesting item is yet again another longbox:

This auction is for the OFFICIAL Long Box to NFL Quarterback Club ’96 for the PlayStation. This game WAS NEVER released on the PlayStation. In fact, it was never completely finished!  When Acclaim missed their opportunity to release the game in time they destroyed all of the pre-made longboxes (all but 1!).  This is an authentic long box that came from SCEA.  It contains the proper SLUS code as well as UPC code.  Because the prototype game wasn’t released on the PlayStation, it becomes one of the RAREST variants ever!  Game is not included since it was never released to retail.

The other auctions are for a copy of Tony Hawk Pro Skater 2 (signed by the Hawk himself) and a PlayStation Rally 1998 Cap (signed by driver Peter Brock).