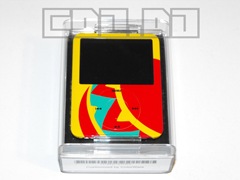 Samba de Amigo is a musical rhythm game played with a pair of maracas. As a song plays, the player, guided by on-screen graphics, must shake the maracas at high, middle, or low heights with the beat of the music, or occasionally must strike poses with the maracas held in various positions. The player is represented on-screen by Amigo, a monkey. If the player does well, the scene around the monkey (usually a concert or a dance) will attract more people and become more vividly animated; if the player does poorly, characters leave and eventually all that’s left is the monkey alone, looking sad.

It was developed by Sonic Team and released in 1999 by Sega in arcades, 2000 for the Dreamcast and more recently developed by Gearbox Software in 2008 for the Wii.

For the release of the later there was apparently an event at the flagship Nintendo World store. At that event they gave out a custom branded 3rd Gen Ipod Nano.

The package has never been opened, so there seller says they’re not clear on a few details. You can’t see the back but looks of it, it does have the monkey character from Samba in it. Also, the seller says that he was told that the Ipod had been preloaded with Samba De Amigo music and videos. Release numbers are unsure, but they can’t be more than a handful.

Cool item for sure.