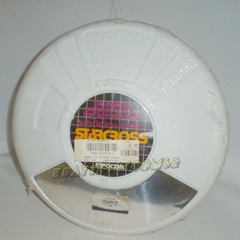 I featured an auction from this seller before, and from what I was told he uncovered a boatload of old Apple II era software. Worth adding to your favorite seller list if you’re into that type of thing.

Infocom games are often viewed as some of the best available at this time and tend to fetch decent prices, even in non sealed form.

Starcross is a 1982 interactive fiction game that was developed for several systems.

The game was Infocom’s first in the science fiction genre. It takes place in the year 2186, when the player’s character is a lone black hole miner exploring an asteroid belt. The player’s ship, the Starcross, is fitted with a mass detector to look for "quantum black holes", which are such powerful sources of energy that one could provide a wealth of riches. When the mass detector finally discovers an anomaly, however, it isn’t a black hole but something else entirely: a massive craft of unknown origin and composition.

The player must dock with the mysterious ship and gain entry to its interior. Once inside, the player discovers a wide variety of alien plant and animal species and an array of unfamiliar technology.

This is the original box for Starcross, but it proved too costly to produce and too unwieldy for store shelves. It was eventually replaced by more conventional packaging.