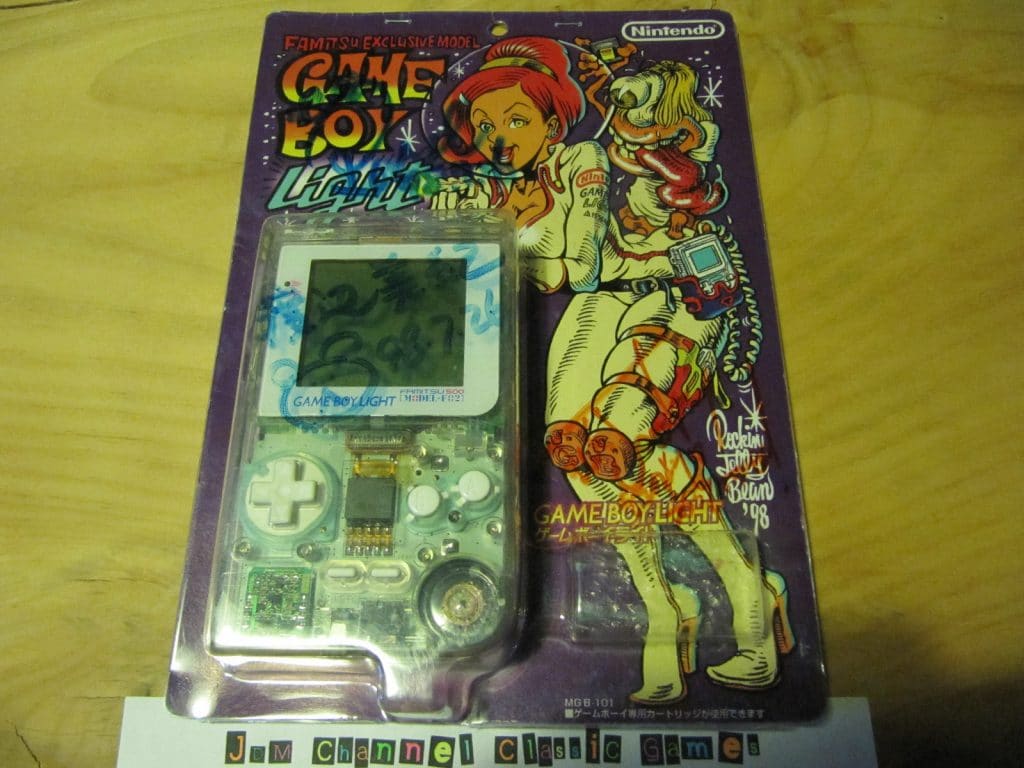 This item is truly a piece of history. To celebrate its 500th issue, Famitsu created the special “F-02” model Game Boy Light, which could be obtained one of two ways. A mail order model came in a rather bland package, marked as an F-02 “Skeleton” model. The second “event” model, shown here, was distributed at an event known as Game Circus, held on (according to this package) August 26, 1998 in Tokyo’s famous Akihabara district. While only 5,000 of these units were produced, it’s the signatures on this unopened package that make it one-of-a-kind. While age has made some of them hard to read, a few that could be made out by the owner are “Miki Watanabe” and “Paxel” – take those as you will.

The price on this item is incredibly high, but there’s just too little documentation on the this particular model of Game Boy Light to tell how much it’s actually worth. Combine that with the signatures, and I still think it’s worthy of a headline.

Vectrex Video Game System – Just the same old Vectrex we know and love, but currently at a good price

NES Nintendo Entertainment System with 59 Games – Solid lot of NES games for a good current bid. Metal Storm and the many manuals caught my eye here

Brand New Pokemon Mini Smoochum Purple Pinball Mini – Nintendo’s effort to expand on the success of the Pocket Pikachu virtual pet line, the Pokemon Mini was a small black-and-white handheld with a meager handfull of Pokemon minigame cartridges released for it. The only place I saw the Mini sold in person was at Pokemon Center NYC (now Nintendo World) – god knows where else they sold these

Super Metroid Poster – The Return Of The Mother Brain – Store Promo – A high asking price, but I’ve found nothing on this poster. Absolutely beautiful print of the box art.

PC-Engine PCE SHUTTLE Console System – Strange spaceship-shaped rendition of the PC Engine, sold only briefly in Japan. Not compatible with any of the CD-ROM2 addons.

SEGA ARCADE SPECIAL SUPERPLAY LASERDISC – In the heyday of LaserDiscs, which were primarily a rental medium in Japan, game publishers like Sega would send out promotional LaserDiscs to rental stores, showcasing their newest arcade titles. This is one such LaserDisc, which has footage of OutRun, Galaxy Force, and Thunder Blade. Condition of the disk may merit the price, despite it looking a bit steep

Sony PlayStation EMPLOYEE ONLY Custom Bar Set – The set itself is kind of bland, but that wooden case with the PS logo is snazzy…