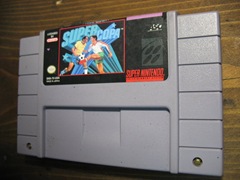 This is by far, one of the hardest SNES games to acquire. There’s only one copy of each existing in sealed and complete condition that is confirmed, and there are only a handful of loose copies as well.

Super Copa is essentially a Spanish and Portuguese version of Tony Meola’a Sidekicks Soccer (a game which I’ve played and find fairly horrible).

Many people argue these aren’t a true NSTC release, and I understand their reasoning. I wouldn’t want to have to pick up these title to complete my set either.

What they forget is that Nintendo released their games by region. In this case- North America (Mexico, USA & Canada).

ISS and ISS Deluxe both appear on the official Nintendo Super Nintendo release list. That means they are official North American releases. They have ESRB ratings. The warranty info is all in US and directs the user to call numbers in the USA or write to the company in the USA. Granted more than likely the release was limited to Mexico, there was coverage in Nintendo Power on these as well. Super Copa is in Spanish, but the manual is also in English. That also has a ESRB rating.