You’ll remember the Cube if you’ve played the game Portal this year. If you’ve been pushing though your backlog of Sega Saturn games of lue of any modern gaming, Portal is a groundbreaking game that was a part of Valve’s Orange Box Compilation.

The Companion Cube is an inanimate object that is used in the game. For someone unknown reason, it’s become insanely popular. Even winning G4’s “Best New Character” of the year award.

Capitalizing on the popularity, Valve opted to offer a plush version of the cube from it’s online store.

After completely selling out in less than 24 hours, some opportunistic individuals have opted to flip theirs for a profit.

This seller managed to flip theirs for a cool $365.00 after a whopping forty three bids. 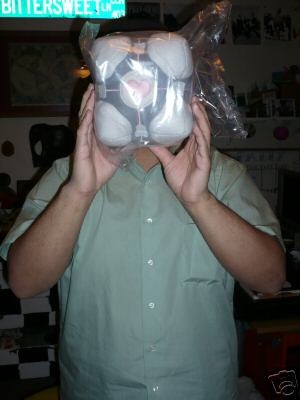 Obviously, it’s not going to sell for that price again as more people have realized this and opted to sell theirs as well.