If you’re into the 16-bit Game Boy, speak Japanese, and carry $6000 in American currency, today your ship just came in.

Or, rather, it’s been docked for a while. This auction has been up for at least four months. Every single game ever made for the Game Boy Advance (that’s 795 in all), straight from an anime store in Japan that’s incredibly overstocked. Every color in the rainbow!

More pictures can be seen at the auction:

Clay Fighter: Sculptor’s Cut is so valuable that anything that has touched the cartridge sells for over seven hundred dollars. If I had a fat man sit on the cart, could I sell his pants for this much?

Radiant Silvergun (Japanese) — Sega Saturn
SNES Castlevania: Dracula X — Sealed and Mint
NES Box Lot (51 in all)
Xenoblade Chronicles has skyrocketed in value after just one year. You shouldn’t have waited on that one
Super Mario Bros. CIB (somewhat still affordable at time of posting)
Another Stadium Events (this one opened, with a lousier box)

This is also my first post here at GameSniped. To honor the occasion, here is a screenshot of eBay being browsed from the original Mac: 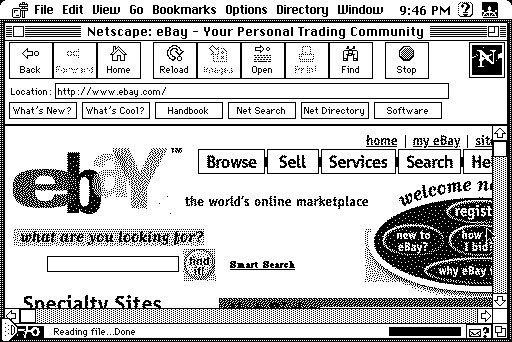 Mind, this was pulled off back in 2000, when the webpage would have been less punishing on a 1984 processor, but even then, it had to be loaded from a 28.8 modem and it could barely keep itself from crashing.

Also of note: the little icon in the top left corner has changed into a Mac standing by a telephone pole. Aww.

For more see Vectronic’s Apple World.
Or if you’d like to see more of my own work, go here.