What the Metal Gear series has done for the stealth game genre is well known and has garnered praise through every full entry. This latest installment, Metal Gear Solid 5 : The Phantom Pain is no different, but it does set a new path for what fans can expect from the stealth game series. Players are tasked with different strategies as they take on different tactical missions all while controlling Big Boss in an open world forum not seen before in the franchise. Konami has decided to reduce the cinematic cut scenes which gives you more time to lose yourself in missions that help you to beef up your army and fortify your home base. As we all know, legendary creator Hideo Kojima and publisher Konami have parted ways, and not on the best of terms. If this truly is his last hurrah as the head of the MGS franchise Kojima has given us a memorable and fantastic gift worthy of his name. Read on for more details in my Metal Gear Solid Phantom Pain review.

Side Note: We reviewed the first part of the series, Metal Gear Solid 5 Ground Zeroes, here 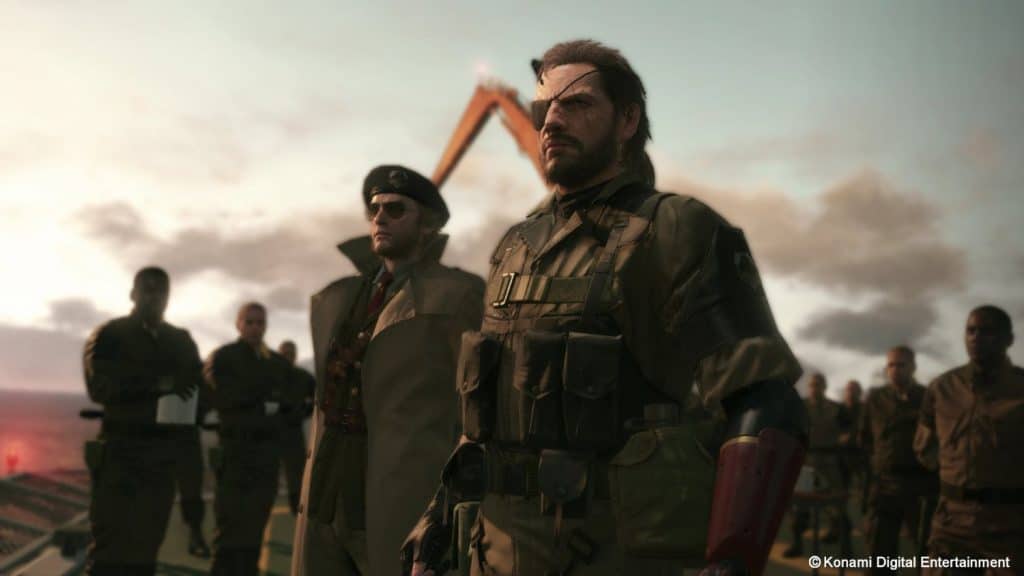 If you are a fan of the Metal Gear series you know that Phantom Pain is the latest in a continual narrative arc that reaches back to the series inception, 1987’s Metal Gear. This is great for fans that are invested in the story and characters, but perhaps a little daunting for players just now being introduced to the Metal Gear Solid series. But what makes Phantom Pain stand out from previous Metal Gear entries is that the story is placed on the backburner.

Now before veterans of the series start to gripe let me explain in further detail. The story is still important or it wouldn’t bear the Metal Gear name. But it isn’t the narrative that drives the player to finish. In Metal Gear Solid 5 you are Big Boss. Your task is to help establish his legend (see, I got you MGS vets back, didn’t I?) by building an army. You must disrupt the machinations of the antagonist Skull Face, who some will remember from Metal Gear Solid 5 Ground Zeroes. As Big Boss begins to step into the shoes of the legend he will become, he will confront very thought-provoking and surprising subject matter that will showcase why Kojima is a master story teller. I won’t spoil these for you but vets and newcomers alike will be enthralled with the story. And if the story is not your thing you can actually bypass it if you want. In a departure from previous entries key story elements are now put into optional audio files. This means that crucial narrative information that will explain some of the games major developments must be sought after, and it is up to the gamer to discover. While I love all of the details of the story and listened to every audio log, for those only interested in the gameplay they might decide to disregard them altogether.

The choice to eliminate cutscenes and story sequences allows you to delve into the mission based action of the game. There are a number of different activities that you can engage in such as sabotaging the enemies operations and stealing resources. At the game’s core, the mechanics mirror that of Ground Zeroes. They do have the addition of the buddy system, which I wasn’t a particular fan of. Not because of any downgrade in playability. In fact, they were fairly easy to operate and each one has a unique contribution to the battle. I just prefer going solo in my stealth games. But hey, that’s me.

Missions in Phantom Pain are well crafted and there are multiple options for you to achieve your goal. Where previous entries are designed with a linear path where you have a particular weapon to complete a mission, Metal Gear Solid 5 missions assume nothing. So if you don’t have that certain weapon that you need to make a mission go a little easier there are different paths for you to choose. Phantom Pain uses a day/night cycle, so use the cover of darkness as your ally, or use the weather elements to aid you. Fog, sandstorms, and rain can make prisoner extraction a little easier. Each mission is open for experimentation with the resources available to you at that moment. This helps create a sense of unique individuality in your mission; YOU are creating Big Boss’s legacy.

And all of your activities as Big Boss have one endgame: improving your army. This brings us to the highlight of Metal Gear Solid Phantom Pain– Mother Base. This symbolizes your power to outside forces and becomes the reason that you keep knocking out missions. Each completed objective and activity rewards you with currency which you then invest into upgrading Mother Base. Walking around the base and seeing how all of your hard work has paid off is amazingly rewarding. The drive to keep improving Mother Base became the sole focal point of my time spent with Phantom Pain.

Metal Gear Solid 5 is a rock solid game, but it does have a few hiccups. As I stated before I was not a big fan of the buddy system, but it in no way hindered my experience. It’s just personal preference. And even though there is still a story there, the game just doesn’t focus on it like in previous entries. It was a little strange but only because I expect that from a Metal Gear game. But the big gripe I have is the fast-travel system. For one thing it’s not fast. I found it difficult to move from one objective to another. The system was very clunky and not something I expect from a series with such great mechanics.

If this truly is Hideo Kojima’s sendoff, he leaves on a high note. It’s amazing to think back on how it started and where it is today. But Kojima’s legacy will be remembered for sustaining a series for a long period of time and at such a high level. It really is a rare occurrence. In order to accomplish this goal, the Metal Gear series has taken risks in order to evolve, and these risks always paid off. Phantom Pain is no different. By changing the traditional staples of the series and introducing new elements- the open world exploration, customizable base of operations, and multi-path mission structure- Metal Gear Solid 5 is a worthy entry in a storied franchise.