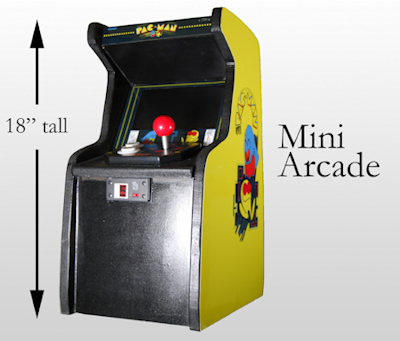 Plug ‘N Play arcade devices are boring. While they have the look and the games we played back then, they don’t really capture that arcade feel.

This mini custom arcade unit was built from scratch using a similar Plug N Play device like this one. It’s a pretty impressive cab and would definitely fit on anyones living room compared to a full size cab.

“The unit is constructed from MDF board, hand painted black with laminated stickers on sides, marquee, and for bezel. The unit utilizes a 12 in 1 Namco Classics plug n play unit for the games. It’s 18 inches tall and weighs 14 pounds. The only thing cosmetically wrong with the unit is on the label for the “B” button the sticker was missing a little portion of the B, which you can see clearly in the photo I included in the auction. It’s very unnoticable unless it’s pointed out to you. So much so that I epoxied it in place before I even noticed it was missing. The plug n play game requires 4 AA’s which can be accessed by opening the back panel just like on a regular size arcade machine. My sons machine still has the same AA’s in it that it had 6 months ago. It is very good at not using up much power. The DVD screen I used will come on automatically when you plug the unit into the wall.”