I’m normally not a big fan of Bape. Dropping $200 on a pair of Shoes or a Hoody is not something that I like to do. If you’ve never heard of the company, they’re basically a Japanese business that specializes in Urban and Hip Hop clothing. They increase the demand and create buzz by making a large majority of their products extremely limited in quantities.

I’ve seen cross promotions that they’ve done before, such as with toys like Kubricks. This Nintendo DS they’ve done however, is immensely cooler. 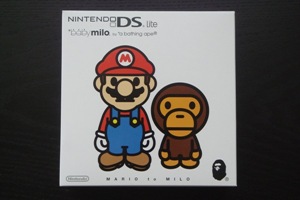 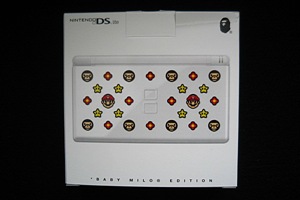 That is some of the coolest box art that I have ever seen.

Apparently the Aoyama Baby Milo BAPE Collector’s DS Lite was only available to the first 1000 people that were waiting in line on the release day.