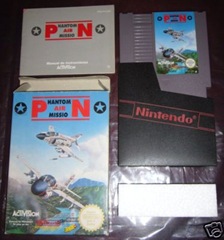 From what I understand, this game is the same as the US release Flight of the Intruder, but underwent a name change for the Spanish release. Also, there are only one or two of these confirmed to be in collectors hands. Quite a rarity, especially for a licensed release.

This one shouldn’t be cheap.

Large Nintendo Promo / T-Shirt Lot (Includes some SNES Era Stuff)
Sealed Super Mario Bros 1 & 2 Canadian Blister Pack (I think this is the third time it exchanged hands since it surfaced)
Game Boy The Flintstones: King Rock Treasure Island (Arguably one of the rarest GB games, although Amazing Tater is rarer and has a cooler title)

Lastly all the contest posts that I need to make will be done tomorrow. I’ve got the whole day set aside for it, so watch out.