Well, for only $10,000 this 24 KARAT GOLD DIPPED SWAROVSKI CRYSTAL LEGEND OF ZELDA WII can be yours!

Now you may have seen this puppy before, as it made the rounds on several blogs when people found out it existed. This is the first time one has been on eBay however. One problem however, is that as far as I’m concerned, this is a fake auction. 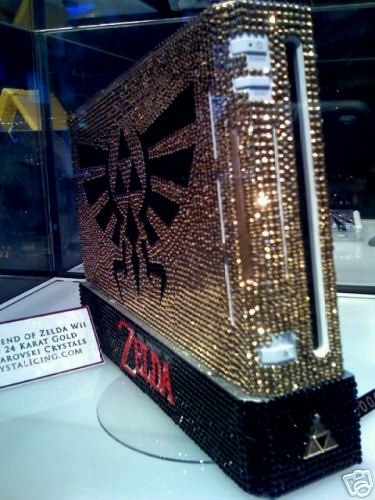 From what I understand, this puppy is/was on display in Nintendo World, NYC – for $5000.00. Created by the fine makers of such wonderful products as the Swarovski Crystal Xbox 360 Faceplate and the Swarovski Crystal Nintendo DS,Â I’m not sure if this is a one time jobbie, or if they supply them directly to the store (but I assume the former).

Either way, as I said, I’m calling fake. Why? Well the seller is using crappy pics of the system that were obviously taken at Nintendo World NYC. If the seller actually had this in hand, I assume they would take some decent pics. Not just use ones they shot through the display case before they purchased it.

My guess is that someone lives near the store and opted to post this auction, pray that someone with more money than intelligence won it, than buy the item and pocket the 5K difference.

Fat chance of that happening, although by making this post I may be making it more possible.