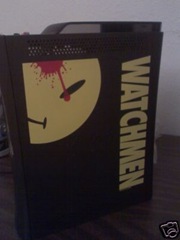 I posted previously about the San Deigo Comic Con LE XBOX 360 consoles a month of so ago. The last one went for $862.00 which seems ridiculously under priced to me. Especially for a console of which no more than ten were made. The LE Batman one’s from Domino’s have been fetching around $1200 on the lower average, which is around $400 more for a system which is five times more common. Side note, there are still several of the Dark Knight Consoles on eBay, five as I post this. Prices are dropping so you might be able to get one for under a grand when these end.

Anyway, back to the Watchmen Console. I would expect the system to retain it’s value over time. You might even stand a possibility of flipping it in a year when the new Watchmen movie comes out. I would expect it to spark a ton of interest in the series, and something like this could quickly increase in value.