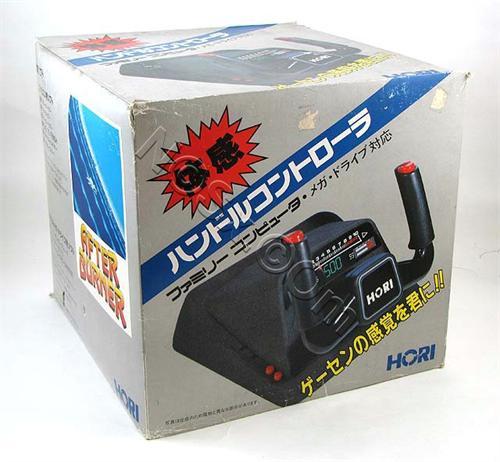 Here is a very cool Famicom accessory. It’s called the Hori Handle controller and was released in Japan in 1989. It was designed for use with Afterburner, but it also makes for an excellent racing controller. The one in this auction comes complete in box, and ships from USA. It even works on NES too via included adapters. As a big racing fan, I’d love to try one of these! They also were released for the Mega Drive and Master System. For people looking for a cheaper alternative, there’s a similar counterpart released in the US called the Beeshu Zoomer, but it doesn’t look nearly as cool as the Hori controller.

Sharp TV NES controller – Hard-to-find controller that went with the Sharp TV which had a built-in NES.

Project Firestart for C64 CIB – A groundbreaking C64 game from 1989. It utilizes many proto-survival horror elements and has a genuinely creepy atmosphere, aided by dynamically-driven music cues, the feeling of isolation, and grotesque cinematic scenes. The game is set in space and one may wonder if this game was the inspiration for a number of sci-fi horror games like System Shock.

Big Box Blood for PC – This is the special edition censored version, not nearly as hard to find as the original, but still a nice piece.