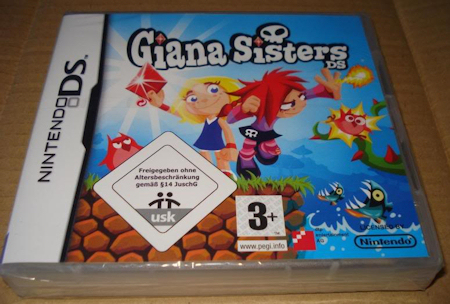 I haven’t heard of this game until Nicola mentioned it briefly last April. The game was re-released in very limited numbers back in November of last year. It was released in Germany, Austria, Switzerland and Australia. No love for the U.S. of A. We’ll probably never see it released here.

Brief history of The Great Giana Sisters: Rainbow Arts published the game back in 1987 for the Commodore 64, Amiga, Amstrad CPC, Atari ST, and MSX. Nintendo might have been breathing behind their necks because its very similar to Super Mario Brothers. A port for the Spectrum was never released though it was reviewed and mentioned in magazines.

Right now there are no listings for Giana Sisters DS on ebay.