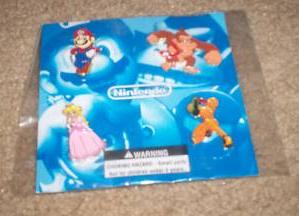 These Nintendo Character Pins were mostly used as giveaways by Nintendo RepsÂ to retail employees, but Nintendo issued a voluntary recall for them in 2008 due to the fact that they contained high-ish concentrations of lead.Â You can check out the official release here.Â From what I’ve read of the situation, if you returned the pins you would receive replacements (rumor was that Nintendo was only sending back Yoshi pins which were already obtainable).Â It makes an interesting item to talk about, but they probably won’t become too scarce since the recall was voluntary.Â On a side note, I’ve had one of those Mario pins in my inside jacket pocket for at least 4 years now…I don’t think I ever licked it though, so I should be fine.Â 🙂 (Sold: $17.13)

This Zelda Plate is actually part of a 3 piece set (cup, plate and bowl).Â I know Zelda merch tends to go for a bit of cash, but just because some random individual lists their plate for $3500 does not mean it is worth even close to that.Â The seller’s added comment “Okay, when I listed this I had no idea what it was.Â Now I do.” leads me to think someone has lead them to believe otherwise. (Sold: $250)