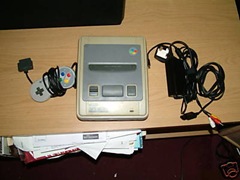 This is one of the nicer mods I’ve seen lately. I’ve seen tons of PC in a NES mods, but this is the first I’ve seen a PC in a SNES conversion.

The PC inside the SNES is an EPIA M10000 ITX motherboard with 512mb RAM and a 50gb Laptop hard disk (near silent) and I have only made ONE alteration to the SNES to get this in there, the RF port had to go (does anyone still have a TV with RF?).

It still uses the power supply jack to power it via the external mini brick and the A/V port still works with composite video and stereo sound. Any A/V lead for the SNES will work on this unit.

The pads still work as they should too and are now recognized as USB HID devices. No alterations were made to the pads themselves so any SNES pad will work (even the SNES mouse).

The spare pins on the joypad port have been used to facilitate upgrades and alterations via USB. I have made two adaptors for this purpose. I usually plug in a flash stick and keyboard/mouse then add roms, apps etc.

All in all I’m very pleased with how this turned out. I know it’s been done before but this is the real deal. Nothing cut up or gaping ugly holes in the back of the machine. It looks like a stock SNES and uses stock accessories to boot!

Cooling is handled with a small fan at the back which does a great job drawing hot air out through the vents in the back of the SNES. Not that it really heats up too much.

Right now it’s setup to play Megadrive, SNES and NES games from the built in frontend. You can add as many systems as you like though or even just use this as a regular PC if you want to. It might be a good system for a child to learn the ropes on too since it plugs into any TV.

The BIN isn’t too bad, at $592.27. Some better pictures would have helped however.