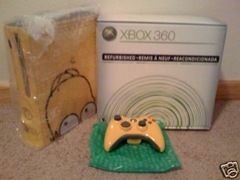 When the Simpsons Movie was in theaters, Fox was turning all sorts of products yellow to tie-in with the movie. From a Samsung cellphone to this Homer-fied Xbox 360.

Obsessive collectors are going to hurt while tracking one of these down, as Microsoft only produced100 units to be given out at a series of special events and promotions. While they went all out with the branding, Microsoft skimped on the console itself a bit, using the 20GB Xbox 360 Pro instead of the Elite.

I’ve only seen a few of these hit eBay and I bet those that go into collectors hands will stay there. If you think you might want to collect for the 360 in the future, I suggest you pick it up now. Problem is, there are hardcore Simpsons memorabilia collectors out there too and I’m sure they’d be happy to throw in a bid next to you.