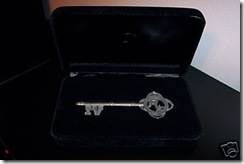 Back in March I mentioned the promotion by Rockstar for GTA IV and the 100% club.

Basically, these keys were given out to only those who completed the game 100% within the first seven days of the GTA IV video game’s release.

Looks like someone now has one up for sale. As far as I know, this is the only one that’s been offered up publicly.